I still owe you a ‘book club’ report from our latest gathering, nearly a month ago… I didn’t come around to write it yet, but, with a bit of delay, here it is!

This time we read ‘Gone Girl’ by Gillian Flynn. I’d heard many opinions about the book, but also about the film (with Ben Affleck). Some were really positive, others were more like ‘too many plot twists’ or ‘it didn’t grab me’ or ‘I couldn’t get into the story’,…

Anyway, the summary really appealed to me so I was rather looking forward to it. Below you can read my thoughts on this book. And what did my book club think of this read?!

This is the summary I could read on ‘Goodreads‘:

‘On a warm summer morning in North Carthage, Missouri, it is Nick and Amy Dunne’s fifth wedding anniversary. Presents are being wrapped and reservations are being made when Nick’s clever and beautiful wife disappears. Husband-of-the-Year Nick isn’t doing himself any favors with cringe-worthy daydreams about the slope and shape of his wife’s head, but passages from Amy’s diary reveal the alpha-girl perfectionist could have put anyone dangerously on edge. Under mounting pressure from the police and the media—as well as Amy’s fiercely doting parents—the town golden boy parades an endless series of lies, deceits, and inappropriate behavior. Nick is oddly evasive, and he’s definitely bitter—but is he really a killer?’

Gone Girl – My thoughts on this book (no spoilers)

The book is alternately told by Amy, the woman who disappears (kidnapped? murdered?), and Nick, her husband, who is quickly indicated as the culprit.

The fact that you read his and her story alternately, makes it an easy read and the story appealed to me from the very beginning. It intrigued me and I wanted to keep on reading to find out more about how, when, why, who!

The book has many plot twists. Some may find this annoying, but I loved every page! It never bored me. At one moment I thought it was going to get a bit tedious, but then so many things happened that I couldn’t wait to finish it.

I love Flynn’s writing. It’s creative, original and imaginitive.  It never is predictable! ‘Gone Girl’ is one of those books which keep you guessing how it will end until the very last page… I was so glad I didn’t see the movie first as that would have spoiled the climax!

Now the other 4 members where all quite unanimous… ‘Gone Girl’ is a (very) good book! The story is really captivating.

Here are some of the questionis we discussed:

During our next book club meeting we will be discussing ‘Shadow of the wind’ by Carlos Ruiz. I am not really looking forward to reading this to be honest, but I’ll try to get through the 540-page story…

Here you can read a post about the ‘book lovers tag’ I was given not so long ago! 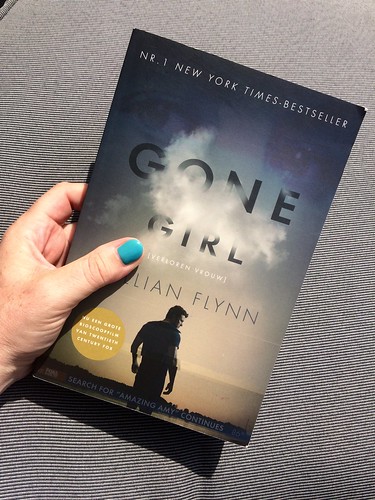