In between my book club reads, I try to read other books. And since I had bought 8 books during the Antwerp Book Fair last November, I’ve got plenty of choice!

To find out which books I bought at the Book Fair, I want to direct you to the blogpost I wrote about my Book Fair Shoplog. So far I have read 5 of the 8 books I bought back then.

The latest book I read from this stash was ‘The last days of Rabbit Hayes’ written by Anna McPartlin.

In my shoplog post I wrote: ‘this is a book about love, wit, power and strength. This book is about Mia ‘Rabbit’ Hayes who loves her ordinary life, but apparently life has other plans for Rabbit as she gets a devastating diagnosis. This book will probably be an emotional rollercoaster and will probably bring tears to my eyes…’

Was it an emotional rollercoaster? Did it bring tears into my eyes? Let’s find out!

‘Mia-“Rabbit”-Hayes knows that life is hard for everyone. And she knows that she’s one of the lucky ones. She loves her life, ordinary as it is. And she loves the extraordinary people in it: her spirited daughter, Juliet; her colorful, unruly family; the only man in her big heart, Johnny Faye. Rabbit has big ideas, full of music and love and so much life. She has plans for the world. But the world, it turns out, has other plans for Rabbit: a devastating diagnosis.

Rabbit is feisty. And with every ounce of love and strength in her, she promises that she will overcome. She will fight fight fight. She will be with those who love her for as long as she can, and she will live as long as she can with music and love and so much life. And as her friends and family rally round to celebrate Rabbit’s last days, they look to her for strength, support, and her unyielding zest for life. Because she is Rabbit Hayes and she will live until she dies.’

‘The last days of Rabbit Hayes’ – My thoughts on this book 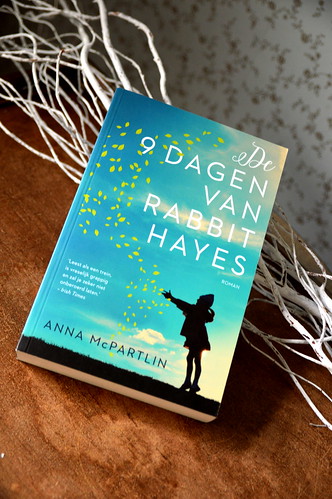 This book gets 4,24/5 on Goodreads and I will tell you straight away: that score is really well deserved! I personally gave it a 5/5 (would have given it a 4,5 but Goodreads doesn’t do half points…).

Now I am normally not into books about people suffering from a fatal illness. I usually find them too corny, too heartbreaking, bleak and soppy. But when I read the cover of this book, the illness wasn’t mentioned at all and the summary attracted me very much. I wasn’t distracted by the title at all as I bought the book in Dutch…. and the Dutch title is ‘De negen dagen van Rabbit Hayes’ (‘The nine days of Rabbit Hayes’ and not ‘The last days…’) so I didn’t have a clue that it was about Rabbit Hayes’ final moments on planet earth…

Back home, I started skimming through the books I had bought, including this one. I read the first sentence and there it was… Rabbit Hayes was diagnosed with breast cancer…  I looked up the summary on Goodreads and then it dawned on me… Rabbit Hayes had a fatal illness and would die!

It didn’t withhold from reading this book though so a couple of weeks ago I started reading it and I was in it from the start.

At first I was a bit confused as many characters are introduced in the first few chapters, but I read on (browsing back towards the first page a couple of times as on that page Rabbit Hayes’ connection with some characters is mentioned). Before I knew it day 1 of her final 9 days had passed and I already was completely into the story… teary eyes and lump in my throat and all… But I had laughed (out loud) several times as well and I couldn’t wait to read on.

This book is about the final days of a young mother and with flashbacks, the writer gives us a look on the life she led from a teenager who fell for the leadsinger of her brother’s band, to the way she lost the love of her life and to the woman she has become: a strong woman, struck down by cancer… but not giving in until the very last moment.

I felt a connection with a lot of characters and that is all thanks to the writing of Anna McPartlin. She has the ability to let you into the lives of Rabbit Hayes, but also her parents, her brother and sister, her daughter, her first love, her friends from the past and present, even her little nephews and the priest who gives her her last rites (that poor priest… she gave him such a fright!!).

This book is a lot in one: it’s humoristic and nostalgic, heartbreaking and heartwarming, bittersweet and oh so very very sad. It’s about life and death, love and family, happiness and extreme sadness… It’s about strength and joy, hope and courage, looking back and looking forward.

I must admit I cried my eyes out at the end as I felt so sad and heartbroken… but hope and love prevailed!

Have you read this book already? Does this review make you curious? Let me know in the comment!