This tips ‘n trips post might not be that interesting for those who do not live in Flanders or Holland (sorry guys !), but as I was pleasantly surprised by this trip, I want to do a post about it.

A couple of weeks ago I entered a competition from the magazine Flair to win 2 film tickets for the debut of film director Lenny Van Wesemael : “Café Derby“. So you can imagine I was quite excited when last week I got a text message to congratulate me for winning two tickets. As my husband doesn’t particularly like going to the cinema and my daughter Charlotte is quite the film-fan, it was obvious that she would be my plus one.

Charlotte is studying to be an assistant director at the Rits in Brussels. She wants to see anything on the screen, big or small, as she wants to learn and see as much as possible. She has already worked on film and television sets as an intern and the more she does this kind of work, the more she realises that this is what she wants to do as a job.

Now I would ‘ve gone to this film anyway, even if I hadn’t won the tickets… and this for several reasons! I wanted to see this film as I want to support the Belgian film industry now just that bit more as one day this will hopefully be my daughter’s habitat. Another reason was that my 12 year old nephew Rohan plays as an extra in this film (unfortunately we didn’t spot him 😦 ). And then the fact that this film is set in the 80-ies was a big plus as well. It brought back a lot of youth memories… (those clothes ! those haircuts ! that music !)

After a quick espresso and macaron break at the Leonidas Chocolate Café in Kinepolis (and after buying the needed sweets to get us through the film), we quickly took our seats in the cinema to enjoy our film evening. 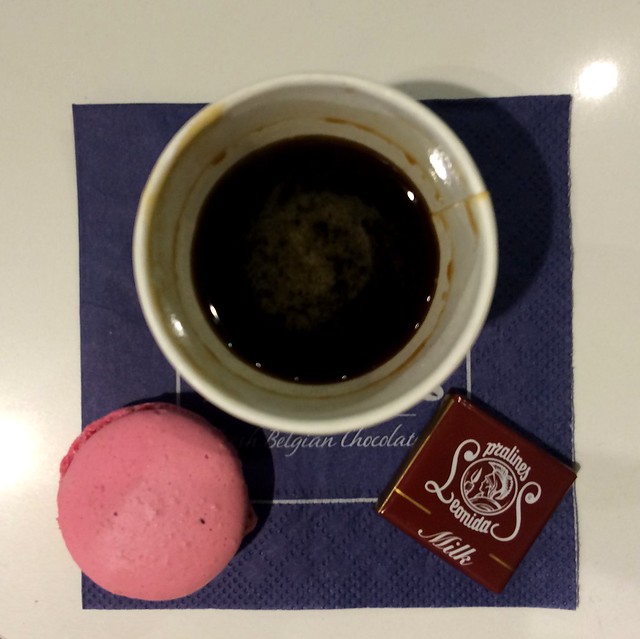 The film is based on the youth of director Lenny Van Wesemael. It tells the story of a 12 year old girl, Sara (played by a brilliant Chloë Daxhelet) who adores her father Georges (another great roll from Wim Opbrouck). She really looks up at him. He is a market trader, a salesman and just someone who wants to make money out of anything. So when he finds out that the Pope will visit Belgium and will give a mass in open-air next to a pub that is for rent, he doesn’t hesitate and moves to this pub with his (second) wife and his five children. Things don’t work out as planned and for Sara it is the first time she realises that even her father can fail…

“Café Derby” is a touching, funny and honest film that I can recommend to anyone. The audience is really drawn into the story. That was mainly because of the cinematography (I especially liked the use of those strong, horizontal images!), the editing (which really appealed to the emotions) and the strong acting performances of both Chloë Daxhelet (Sara) and Wim Opbrouck (Georges).

So thumbs up to the cast and crew of this beautiful Flemish film ! This film is now to be seen in Flanders and probably in some Dutch cinema’s as well.