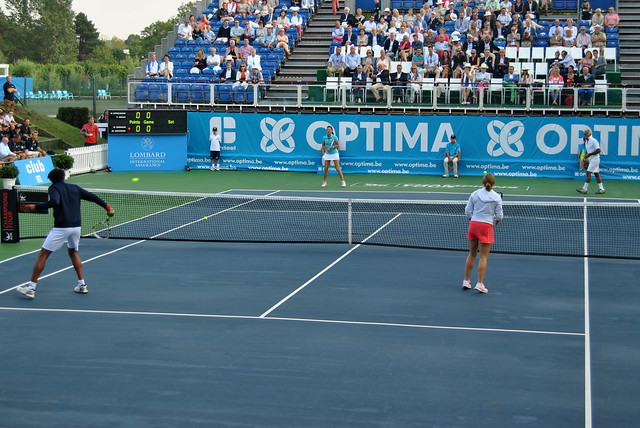 My husband also enjoys the game (he was more a McEnroe and Connors fan) and so we were quite happy to have won some tickets for the Optima Open in Knokke (mid August), an event where former tennis players show what they still have in store.

We decided to make this trip into another date (like the one we had in Antwerp). We have discovered that treating an outing like a date, makes it feel so much more special you know… Like the days before we were married… You’ve got to keep the spice up in your marriage 🙂 !

After our one o’clock cocktail (an alcohol free for me thank you very much !), we went to the Royal Zoute Tennis Club where the event took place. We were welcomed by the hostess of Pimm’s offering us a small Pimm’s and our tennis afternoon was off to a good start.

The first game was between Belgian Xavier Malisse, once ranked 19th of the world, and Thomas Enqvist, the Swedish tennis player who was once number 4 (and was and still is a blond god 🙂 ). It was a pretty good game which could ‘ve gone either way but it was Malisse who won in the end. In this laid back tournament playing and creating a good, sportive atmosphere is more important than actually winning. There is a very relaxed atmosphere between the players and the public, which makes this event so much fun.

After the Malisse/Enqvist game, the heavens opened for more than an hour of torrential rains. But no worries, we could lounge in the beautiful marquee. We set ourselves in the comfortable sofas having another Pimm’s (full-size this time 🙂 ) to kill the time… I could think of worse ways ! Some of the players even mingled amongst the crowd, which is just another example of how laid-back this tournament is.

The second game of the day could only start at about 18u30 because of the rain delay. It was a mixed double between Mansour Bahrami/Dominique Monami and Yannick Noah/Sabine Appelmans. This game was so much fun ! Especially the men showed some great tricks and there was never a dull moment. They continuously interacted with the public and it was like watching stand-up comedy… on a tennis court !

After this match we went to have diner in one of Knokke’s many restaurants. We chose ‘La Terasse du Zoute’ which happened to be an excellent choice ! Although it was extremely crowded, we were served very friendly and fast. I had a Thai salmon carpaccio as a starter and grilled sea bass with a tomato coulis as a main course.

We had a bottle of Miraval rosé. This is a wine from the Provence, from the estate of Brad Pitt and Angelina Jolie. I must confess that I only ordered this wine because it was from Brangelina’s estate (I know… I can be a celebrity freak sometimes…), but we certainly were not disappointed ! This rosé is fresh, fruity and I was sorry I could only drink 2 small glasses as I still had to drive home…

My husband and I had another fantastic date and are already planning our next one. But for now we say goodbye and see you very soon Knokke !