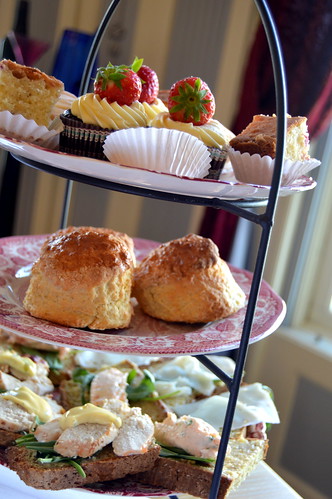 I’m a bit of a Jane Austen fan. Ok, I admit it… I’m struggling to read her books in English (at the rate I am currently going it will probably take me another 10 years to finish them all), but I have seen a lot of film and television adaptations. I just love these costume dramas… the slow storylines, the beautiful scenery, the fantastic locations… And it would  definitely be a dream come true to make a Jane Austen themed trip around England and attend the Jane Austen festival in Bath! During that trip I would certainly use Karin Quint’s book ‘Het Engeland van Jane Austen’ as my guide. This book has only been published in Dutch, but it is a true treasure to all Jane Austen fans! It takes you all around England and more precisely to Jane Austen related places, villages, cities, estates, houses,…

Besides information about Jane Austen’s life, friends and family, you get to know about the places she and her loved ones once visited or lived in. The book also describes the many places which are used as film location for the most recent television adaptations and films.

Clearly this book is the result of years and years of reading, preparation, travelling and research. This results in a complete guide, which is ever so interesting not only for Jane Austen fans, but also for those who like history and England. Reading it, makes me want to jump in my car and start exploring!

Now… what on earth is the link with Dordrecht I hear you think… Well… in Dordrecht Karin Quint, gave a lecture about her book and more precisely about travelling during Jane Austen’s time. I read about this lecture on Karin’s website  and as Dordrecht is only a one hour drive, I really wanted to go this lecture.

My husband is not exactly a Jane Austen fan… well, he has seen Pride and Prejudice (the BBC adaptation) and he loves travelling to England… that and the fact that the lecture was followed by a high tea, convinced him to join me. Our eldest daughter, an even bigger Jane Austen fan than I am, was in between two city trips and she was ever so glad she could also join us.

After dropping our 2 other kids off at school, we made the one hour drive to Dordrecht. We parked at the P&R at Dordrecht station and after a 20 minute walk, we arrived at the Dordts Patriciërshuis, where we were welcomed by Karin Quint herself. A bit later we were sitting in the attic along with a bunch of other Jane Austen fans ready for the lecture…

The lecture lasted about 1,5 hours and we were pleasantly surprised! Karin Quint really knows her stuff and she is a passionate, enthusiastic and brilliant narrator. At the end of the lecture we all wanted to leave for that Jane Austen trip right away 😀

The lecture was followed by this absolutely fabulous high tea from Hightealicious, which was served in the beautiful Maaskamer of the Dordts Patriciërshuis. We had a table overlooking the river Maas. The decoration, the crockery, the fine sandwiches, delicious scones and beautiful pastries… it was all picture perfect!

During the high tea, everyone was talking about the lecture, about Jane Austen, her life and books, the film adaptations,… we were completely submerged in the Jane Austen atmosphere! 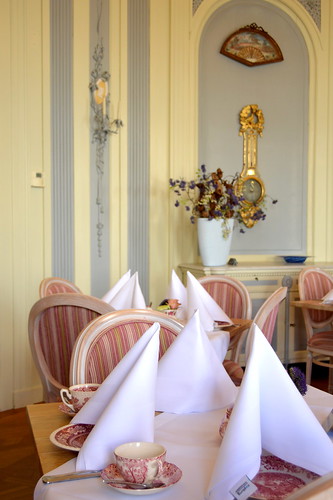 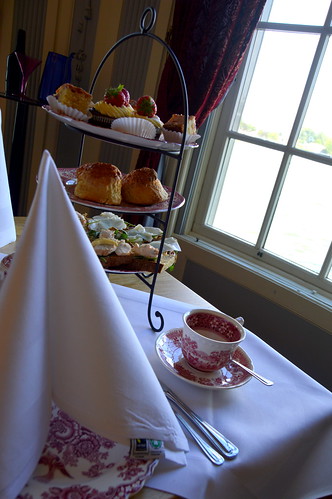 The author had a chat at each table to get to meet her readers and fellow Jane Austen fans. She told us about a guided Jane Austen trip she is planning for June 2017 and also about other activities which will be planned in 2017 (lectures, readings, a Pride and Prejudice marathon, they even want to organise a lecture with Q&A with Adrian Lukis, better known as Mr Wickham! If you want to know more, do check Karin’s website!). 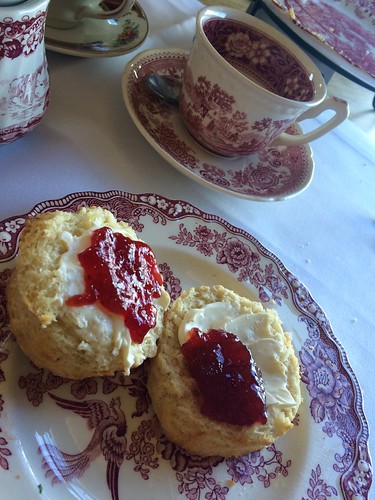 Now about the high tea… I definitely want to give compliments to the chef… the freshly baked sandwiches and scones were heavenly! And all these yummy goodies, were accompanied by three different teas. The staff was very friendly and we enjoyed every single minute of our time at the Dordts Patriciërshuis. 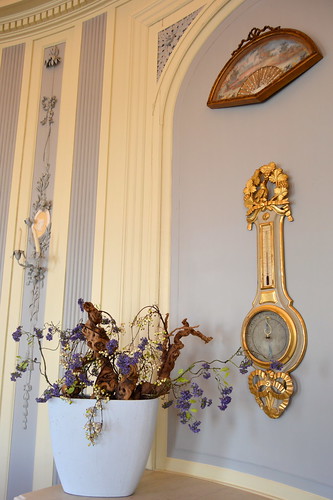 After our delicious high tea, we had the chance to explore the Dordts Patriciërshuis. This is a 17th century house, situated in the harbour area of Dordrecht. It’s an intimate house museum which gives you an impression of a Dordrecht Patrician household at the end of the 18th century. 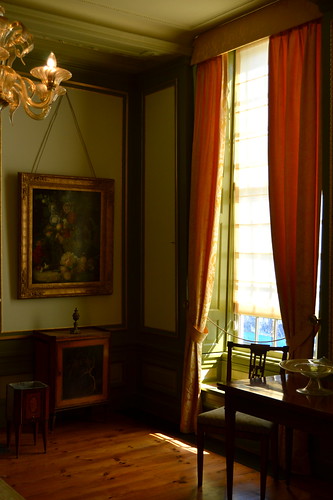 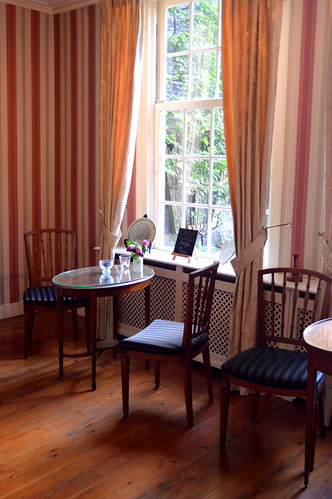 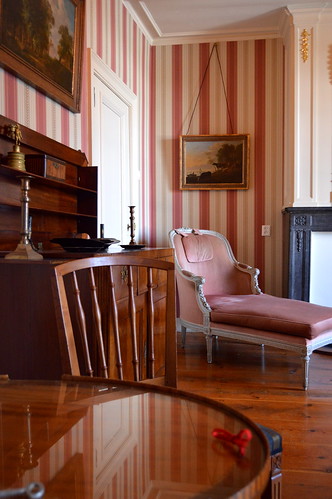 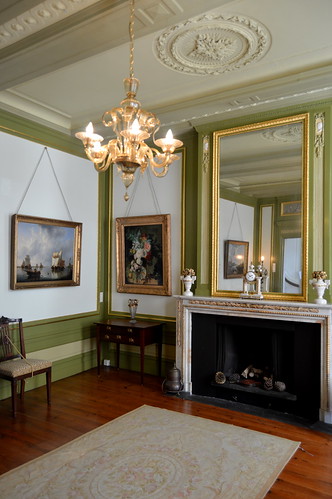 Up until recently, this museum was a private home. There are several rooms you can visit : the Maaskamer (the stunning room in which we had our tea) the dining room, the reception room, the attic,… These rooms are decorated with antiques and beautiful paintings.

There are also a couple of exhibition rooms. During our visit, there was an exhibition about glassblowing and a photography exhibition about Venice. We were also shown the cellar, which contains the old kitchens. Do scroll all the way down as I treat you to heaps of pics 🙂

Dordrecht has so much more to offer. Soon I will show you some more pictures of the town itself!

Here you can read a post about two Jane Austen related estates I visited last year!

PS: Karin Quint has a website www.janeausten.nl on which you can read a lot about Jane Austen, there’s a webshop, a forum and on the site you can read about passed and future activities. 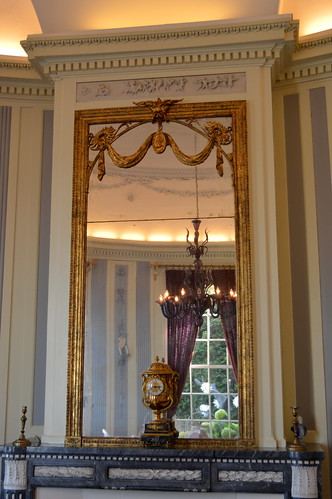 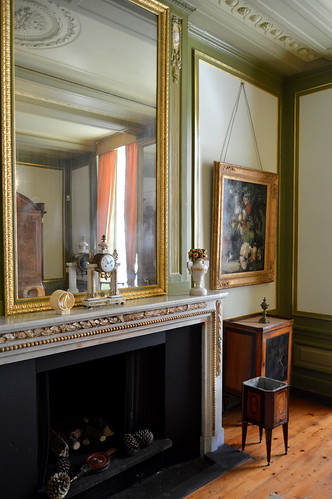 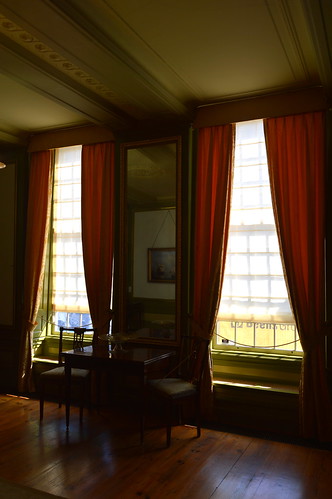 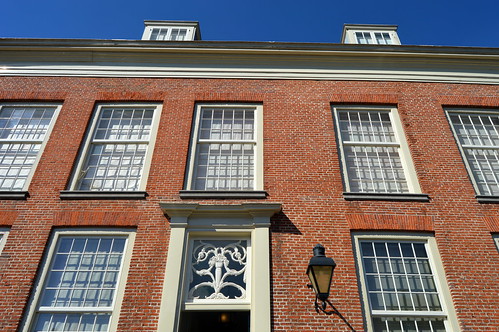