We recently had our first book club meeting after the summer. We discussed ‘Shadow of the Wind’ by Carlos Ruiz… I was a bit reluctant to start reading this 550 pages thick book… so let me tell you what I thought about it!

The Shadow of the wind – Summary (no spoilers)

‘Barcelona, 1945: A city slowly heals in the aftermath of the Spanish Civil War, and Daniel, an antiquarian book dealer’s son who mourns the loss of his mother, finds solace in a mysterious book entitled The Shadow of the Wind, by one Julián Carax. But when he sets out to find the author’s other works, he makes a shocking discovery: someone has been systematically destroying every copy of every book Carax has written. In fact, Daniel may have the last of Carax’s books in existence. Soon Daniel’s seemingly innocent quest opens a door into one of Barcelona’s darkest secrets–an epic story of murder, madness, and doomed love.

So when we drove to Groningen (which is a 3 hour ride for us) in the midst of August, I thought this would be good opportunity to start  reading. I read about 150 pages that day and I was immediately absorbed by the story!

I must say that there were parts where I struggled to keep going as it tended to get long-winded several times, but I endured and in the end I was really glad I did and that I could put this piece of literature on my ‘have read’ list.

I was a bit disappointed with how the story finished. For pages the story went on and on and on, but the final 30-40 pages seemed a bit rushed all of a sudden. And to be honest… I wouldn’t have mind another ending, but I won’t go further into this as that would give away spoilers!

If it wasn’t for our book club, I would never have picked out this read, let alone finish it! But in the end I am so glad that I read it and I would certainly recommend it to people who like intriguing, descriptive literature! 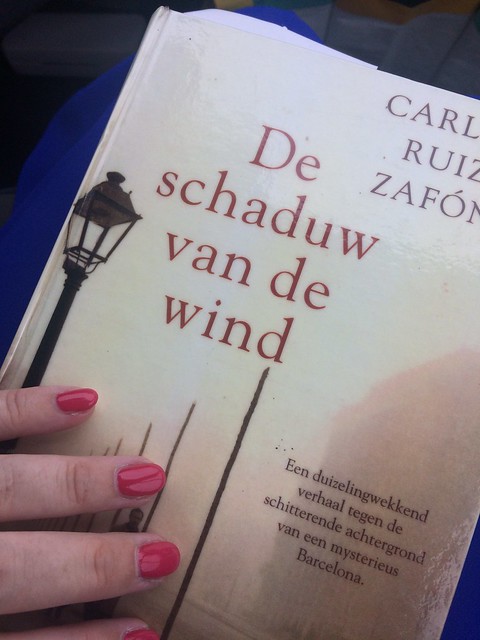 The Shadow of the wind – The book club

The Shadow of the wind – Score

Personally I gave ‘The Shadow of the wind’ 8,5/10. I couldn’t give it a 9 as I had struggled on several occasions to keep reading…

Our next read will be ‘And the mountains echoed ‘ from Khaled Hosseini… so stay tuned if you want to find out more about this book!

Here you could read a post about two summer reads!

11 thoughts on “Books ‘n Blogging: The Shadow of the Wind – Carlos Ruiz Zafon”