A couple of weeks ago, we had our 4th book club meeting from this year. We discussed ‘The diary of a young girl’, the true story of the hidden life of Anne Frank… Read on to read my thoughts on this book!

The diary of a young girl – Summary (no spoilers)

“It is 1942 in Holland and the Germans have invaded. All Jewish people are frightened for their lives, so the Frank family hide. Life is dangerous but they hope for the best – until they are finally discovered. Anne Frank was a real person, and this is her diary.”

The diary of a young girl – My thoughts on this book

‘The diary of a young girl’ was my choice for our book club. I picked it out because I really liked it when I was a teenager and I wanted to find out if I still like it today… 30 years after reading it for the first time… being an adult and a mother now instead of a teenager…

This book is the true story about Anne Frank, a young jewish girl who lives in Amsterdam. During the second world war, she goes into hiding together with her parents, her sister and another family of three. A bit later on, an eight person joins them in their hiding place. Unfortunately, a couple of months before the end of the war, they are betrayed and they are all sent to concentration camps… there is only one survivor: Otto Frank, Anne’s dad.

The diary of Anne was found by a co-worker of Otto Frank. When Otto returned to Amsterdam after the war, she gave him the diary and he decided to publish it, as that was his daughter’s wish. He barely edited and that makes this diary so special in my opinion.

This diary is a legacy: so pure, so true and so moving that it leaves no one untouched.

Thirty years ago I read this book as a teenager and I could identify myself with her. Now I read it with the eyes of an adult. And even though I found the book a bit childish in the beginning, that feeling changed after about 30-50 pages.

Anne was such a strong-willed child, so mature for her age! Being able to write like that in those circumstances… she certainly was very talented if you ask me and I honestly believe that Anne would have been the great writer she aspired to be.

In my opinion this book should be a compulsory read for all 14 year olds. These days teenagers hardly know a thing about the second world war and all the cruelties that are associated with this war. By reading this book, they can identify themselves with a peer and they can try to imagine how it must have been growing up in a hiding place.

Some people say that the book is rather boring as nothing really much happens. Now that is true of course. Basically, all Anne talks about is about growing up, the troubles she experiences having to live with so many people in a small place, the typical problems she has as a teenager (like the feeling that no one really understands you!), the quarrels with her parents, the insecurities of how long the war will go on (and subsequently how long they will have to stay in hiding), the uncertainty of the future… if there even is one! She talks about her feelings, her first love, her expectations and the things she believes in.

But let me emphasize that this book is a diary. It’s not a story that’s worked out entirely and which has a beginning, a middle and an end. To me it actually felt rather daunting that the book ended so sudden as of course we all know how her story really ended… 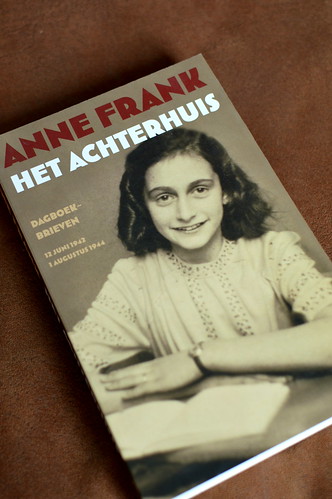 The diary of a young girl – The Book club

Below you can read some of the questions we discussed:

The diary of a young girl – Score

We’ll be having a summer break with our book club, but in September we come together to discuss “The solitude of prime numbers” from Paolo Giordano!

2 thoughts on “Books ‘n Blogging: The diary of a young girl – Anne Frank”