“Music is the soundtrack of our lives.” – Dick Clark 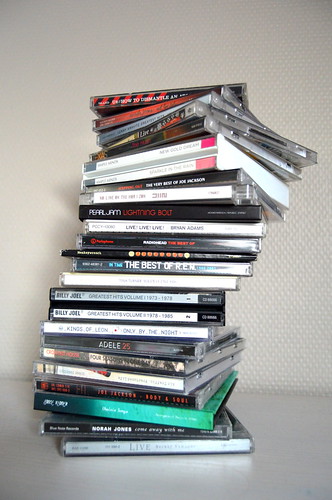 Music has always played an important role in my life. As long as I can remember, there was music in my life… and now I have made a soundtrack of my life…

I do not play any instruments myself… and the neighbours’ cat definitely can learn a thing or two of my singing skills… but I just couldn’t do without music. I like all sorts of music… rock, pop, new wave, disco, jazz, soul, classic, metal,… even some dance!

As I’m nearly 45 now  (two more days!) I wanted to make a soundtrack of my life so far… it was very difficult to chose only 45 songs… and I’m sure that if I had to do it again, I would come up with 45 other songs!

I have chosen these 45 songs because they mean something to me. And to each song summed up here below there is a memory… good or bad… happy or sad… whatever… every song is part of my life.

I hope you’ll have fun browsing this list… I sure had fun making it!

Soundtrack of my life:

Phew… making this list surely was a trip down memory lane. And to my kids… whenever I’m old and senile and living in a retirement home… can you please put these songs on a playlist and play them for me… on repeat… I’m sure they will bring a tear in my eye or a smile on my face!

4 thoughts on “Talks from the heart… Music”