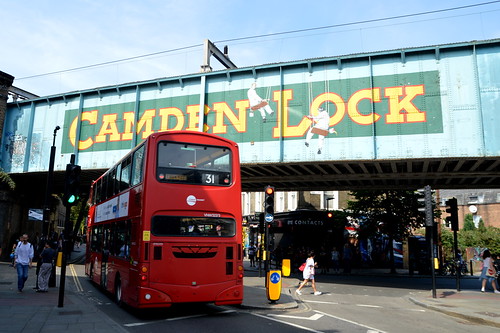 Last week you could read about our daytrip to London and how we walked through beautiful Bloomsbury in the morning. In the afternoon we took the tube to end up in an entirely different neighbourhood: Camden Town!

Camden Town is a very lively neighbourhood. The place buzzes and it is well known for its markets which are a major tourist attraction. The area is especially popular with young, alternative people, but no matter how old or young you are, you will certainly enjoy a couple of hours in this district in the north of London! 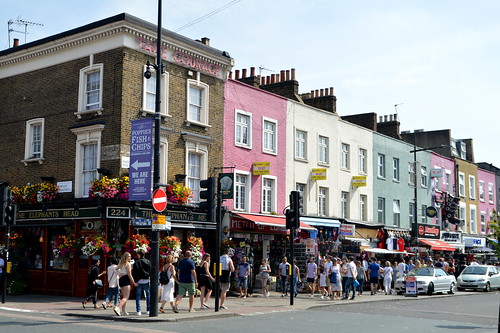 In Camden High Street you find one shop next to another and nearly each and every of them has a special house front: it is painted in a fab colour or it has all these arty farty objects stuck on them. You just don’t know where to look first. After our walk in pretty Bloomsbury, this was something different!! 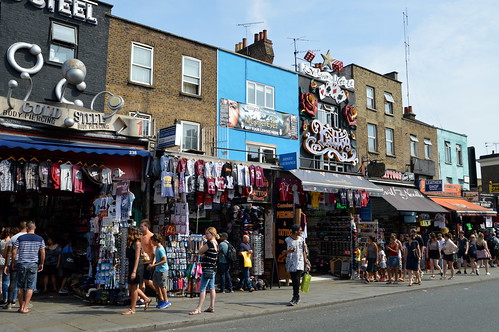 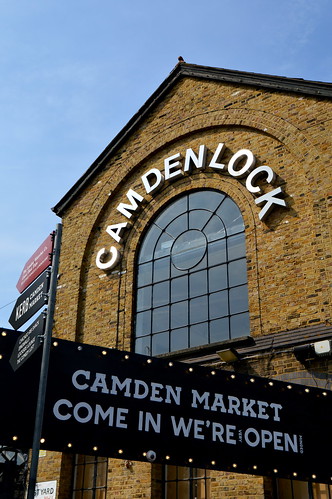 What originally started with 16 stalls, has now grown into the largest market of London, open 7 days a week (9.30 am – 6 pm). Over 1000 stalls and shops sell a variety of clothes, jewellery, handmade stuff, antiques, books, music,… 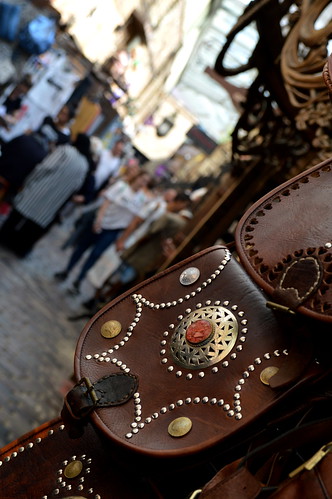 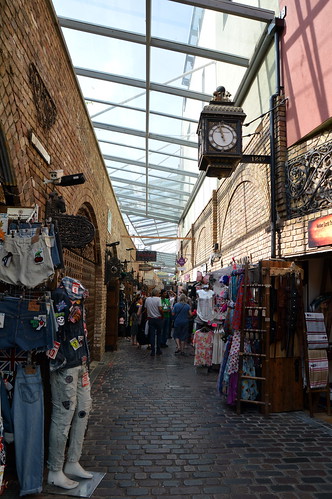 As we only had about 4 hours time to spend in Camden, we just wondered around from stall to stall, trying on stuff, buying some clothes and tea, having a drink and enjoying a pasta from one of the many food stalls.

But if you have more time, I think it would be just fab to spend the evening in one of the many pubs, bars, music venues or clubs! I bet this place is booming at night 🙂 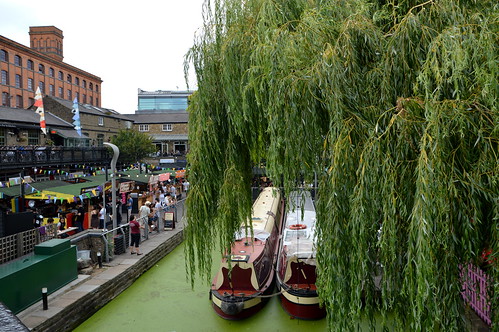 This canal runs through the heart of Camden Town. When the weather’s fine, people are sitting on the edge of the canal soaking up the sun. You can also take a boattrip on the canal, crossing The Regent’s Park towards Little Venice, which is a tranquil canal area in the west of London. 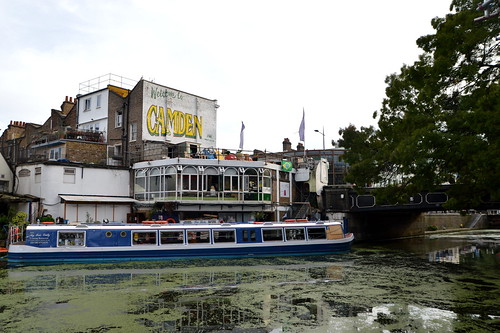 Back to St Pancras Station… 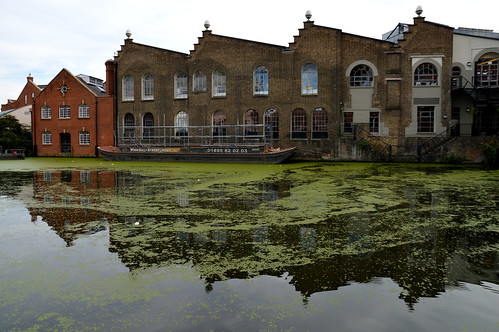 When it was time to head back to St Pancras Station to catch our train, we decided to walk instead of taking the tube. We walked all the way from Camden Town towards St Pancras which is quite doable. You can’t go wrong as you just have to stay beside the Regent’s Canal!

This part of London might not be the prettiest part and it is in full development. I bet in 10 years time it will look so different from today! We enjoyed our walk as it was quite peaceful after the hustle and bustle from Camden Town. 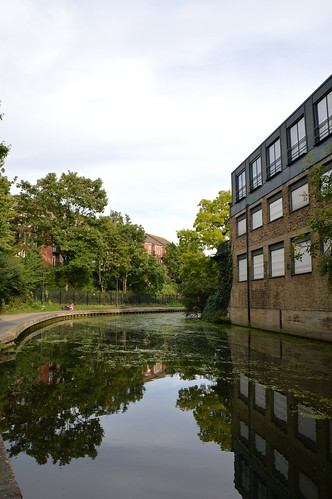 … but first a stop in King’s Cross Station!

Before entering St Pancras Station, we went inside King’s Cross Station on the other side of the road. As both my girls are Harry Potter fans, we wanted to see THE cart from platform 9 3/4.

When in London about 5 years ago, we went to see this cart (my husband, my eldest daughter and I) and it was just half a cart standing next to a brick wall… but now it is completely commercialised…  as are all things Harry Potter I guess!! There was a queue of people waiting to ‘push’ the cart into the wall and there was a company taking pictures of them which they could buy in the Harry Potter store next to the cart! 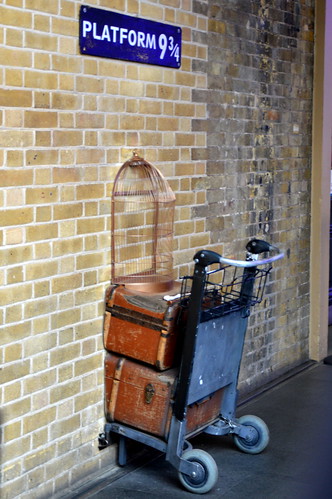 Luckily my youngest daughter, which hadn’t seen this cart before, was satisfied with just seeing the cart instead of ‘pushing’ it so we didn’t have to waste time queueing 🙂 However we did go to the HP-shop of course and ended up buying some t-shirts!

And that rounded up our daytrip to London. We were tired, but satisfied that we cramped in so many things in just one hot day!

What would you do if you only had 9 hours in London? Let me know in the comments… I might get inspired for a next trip 😀 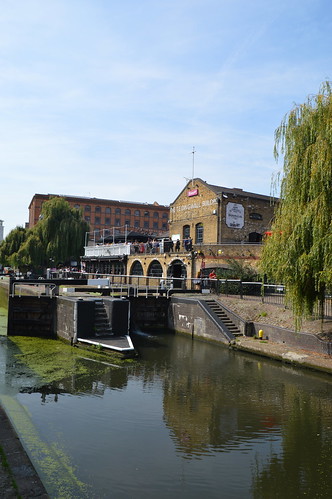 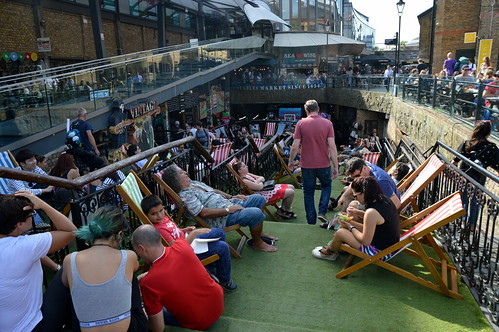 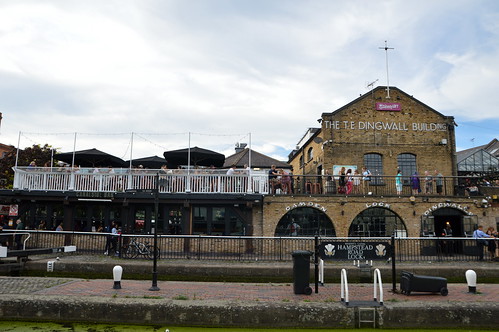 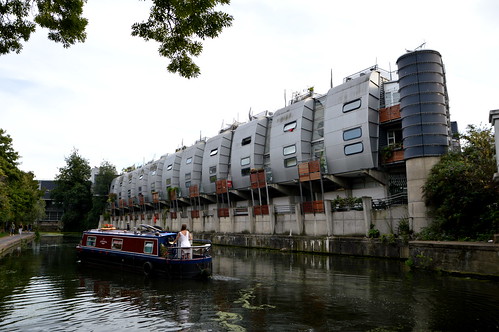 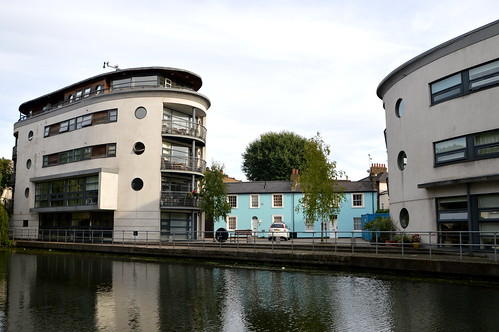 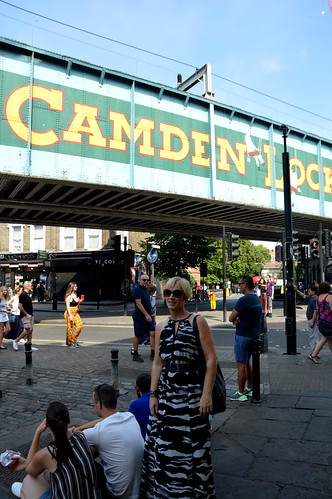 I’ve been to London loads of times but only visited Camden briefly, next time I go I’ll have to stop by and have a look around. Thanks for sharing!

You’re very welcome 🙂 Camden really is worth it… lively, trendy neighbourhood!! Thanks for your comment! Love, Kathleen

Love! I bought some realy nice candles in Camden town last time I visited. Also my daughter did not want to queue for the HP picture 🙂

Hahahaha… we’re soooo alike 😀 Thanks for visiting and have a lovely Friday! Kathleen x

Wow didn’t know Camden looked so good, I’ve always been a Greenwich market fan but Camden definitely looking like it’s worth a visit

Definitely!!! Will add Greenwich market on my list then 😉 Thanks for stopping by and have a lovely day! Kathleen x